Enhance your knowledge of sashimi and prepare for your next Sashimi meal! Get various sashimi ingredients and kitchenware delivered straight to your door with Umamicart.


There are a lot of Japanese restaurants and so many sushi fans around the world, but do you know the difference between sushi and sashimi? Sashimi, known in Japanese as 刺身, which roughly means “pierced body” or “cut meat”, consists of raw foods sliced into diagonal and thin slices for consumption in Japanese cuisine. It most commonly refers to sliced fresh raw fish, but also includes other seafoods and meats. It is not to be mistaken as sushi, which is rolls of vinegared cooked rice rolled in sheets of nori, or seaweed, and with additions of various garnishes such as vegetables, egg, meat, and seafood wrapped inside the roll. As opposed to sushi, sashimi is just the raw food items alone. Since it is a direct tasting experience, the fish or meat is held to a very high standard.

How to Eat Sashimi 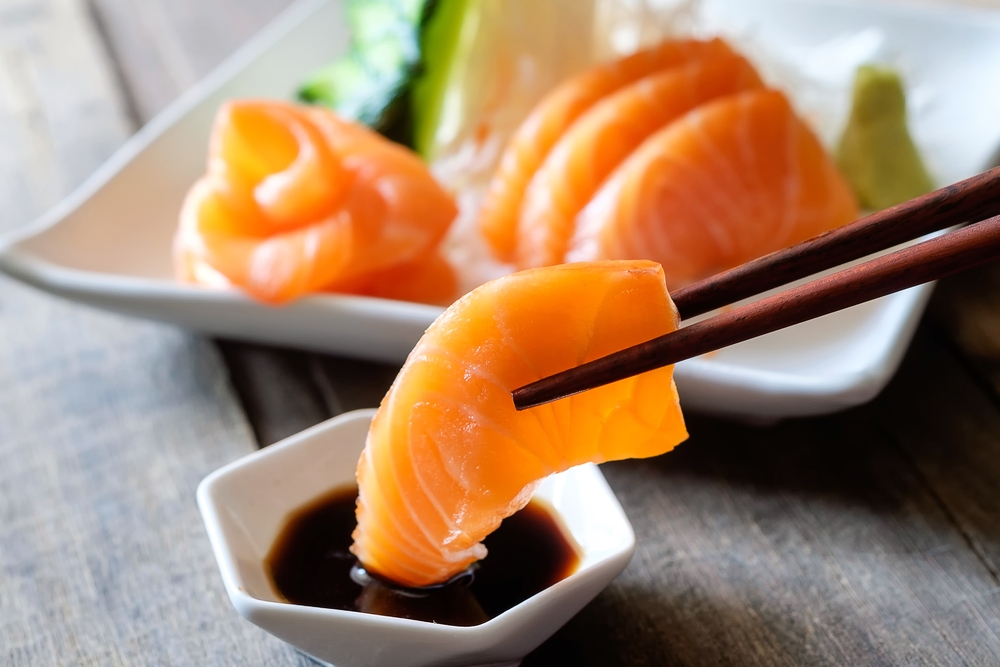 Many Japanese chefs view sashimi as one of the finest quality foods in Japanese dining. Hence it is usually eaten before various strong flavors influence your palate.


Sashimi can be eaten by itself or enjoyed while drinking some beer or sake (Japanese fermented rice alcohol). While sushi can be traditionally eaten with our hands, the proper etiquette to eat sashimi is never to be eaten with hands, but instead with chopsticks.


Alongside the primary sliced seafood or meat, sashimi may be garnished with daikon (Asian white radish), shiso (Japanese perilla leaves), kogiku (chrysanthemum flower), or even benitade (red water pepper sprouts). Some sashimi also include a dab of wasabi (strong horseradish paste) or grated ginger on the piece. It is typically served on a plate and eaten with dipping sauces like soy sauce or ponzu (a citrus-based sauce) for meat sashimi.


Wasabi is known to be able to kill many types of harmful bacteria or parasites found and also inhibit microbe growth. This is a strong motivator for people who may not enjoy the strong taste and effect of wasabi to consume wasabi as a way to prevent potential food poisoning. In addition to the spiciness of wasabi, it is also very aromatic. To keep the aroma given by the wasabi, put an appropriate amount on top of the sashimi before dipping it into soy sauce. Alternatively, consumers may mix soy sauce with wasabi paste and dip each sashimi piece into the mixture.


Sashimi can be eaten by itself or enjoyed while drinking some beer or sake (Japanese fermented rice alcohol). While sushi can be traditionally eaten with our hands, the proper etiquette to eat sashimi is never to be eaten with hands, but instead with chopsticks.


There are many varieties of sashimi, but listed here are seven large categories of sashimi (some of which you can easily find on Umamicart):

When you see a piece of fish labeled sushi- or sashimi-grade, that means that the seller has deemed the fish as safe for raw consumption. It is used to identify the fish supply that is the freshest, highest quality, and treated with extra care to limit the risk of food-borne illnesses, where the fish usually undergo a freezing process before it is sold.


It is worth noting that the term is not officially regulated by the Food and Drug Administration (FDA). However, the FDA does issue advisory regulations on procedures for safe handling of fish meant for raw consumption, including the different times and temperatures required for certain fish to be deemed safe for raw consumption.


A recipe to use with Sashimi

Read our guide for cutting sashimi to learn how to prepare your own sashimi at home! Here is a sashimi recipe we want to share with you using tuna (or any other desired fish substitutions such as salmon) with daikon and ginger:

Check out this Surf & Turf Luxe Set to get started on making your own sashimi and sushi at home!